Small molecules of dna exist in bacteria as circular units. they contain...

Small molecules of dna exist in bacteria as circular units. they contain few genes but are extremely important since they carry traits for drug resistance. these molecules are known as
a. chromosomes.
b. nucleoids.
c. plasmids.
d. nucleoli.
e. lysosomes

The correct answer was given: Gabysh4105
These circular DNA molecules are called C: Plasmids
Thanks 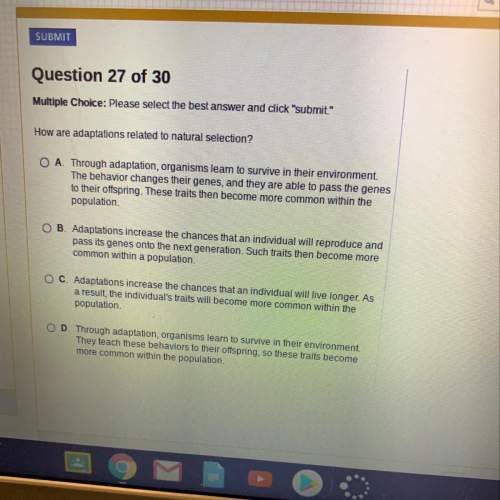 Other questions on the subject: Biology

Biology, 22.06.2019 04:30, nefertitihorne12
Why is it incorrect to say that mitochondria function only as energy factories with cell
Answers: 1
continue

Biology, 22.06.2019 08:30, victory08
What does polymerase chain reaction (pcr) do? o a. separates dna fragments by size o b. cuts a dna sample into fragments o c. provides an overall picture of a person's chromosomes o d. makes more copies of a sample of dna
Answers: 2
continue
Do you know the correct answer?
Small molecules of dna exist in bacteria as circular units. they contain few genes but are extremely...

History, 26.08.2019 11:50
How does the play (antigone) resolve the conflict between divine authority and human authority? a. each character chooses familial loyalty over civil obedience. b. cre...

English, 26.08.2019 11:50
What is the result of capulet biting his thumb at the montague? a. the prince acknowledges the families' peacefulness. b. the capulets are insulted and moved to fighti...
Other tasks in the category: Biology More task

Total solved problems on the site: 11358130
Instant access to the answer in our app
And millions of other answers 4U without ads